Warning: Use of undefined constant php - assumed 'php' (this will throw an Error in a future version of PHP) in /home/gmdesig3/public_html/wp-content/themes/gm-design/single.php on line 54

In this second instalment of Content Marketing Statistics for 2017, I’m taking a look at the power of Video – you’ll find a few handy statistics in the infographic below. Video is all around us and unless you’ve been hidden away, you’ve probably noticed its rise in prominence within content marketing in the last few years. You can’t scroll down your newsfeed in Facebook for more than a couple of seconds without encountering a video of some kind. With this in mind, it’s not surprising that 100,000,000 hours of video is viewed daily on Facebook. 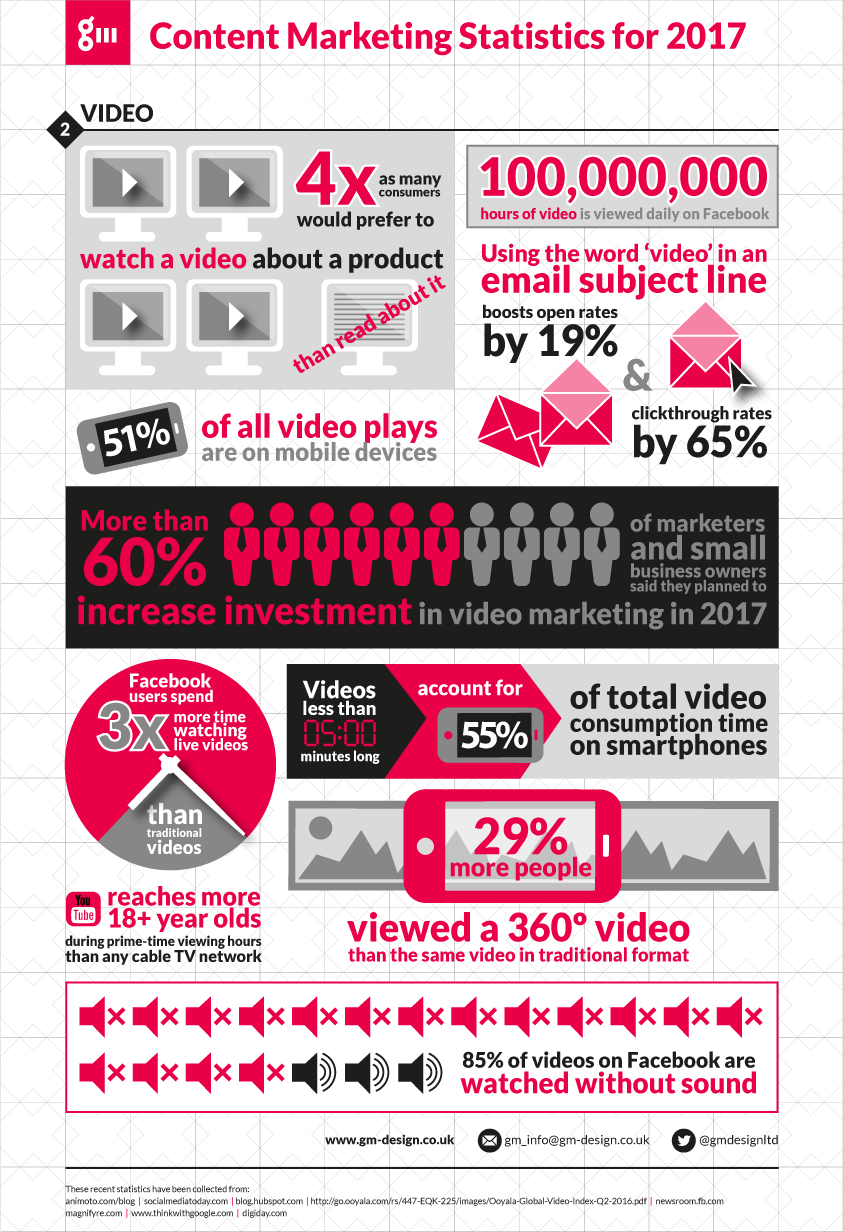 The inception and rise of the smart phone over the last decade has had a clear impact on the increase of video. With half of all video plays, 51% to be precise, being on mobile, you can see how video and mobile are mutually beneficial to each other – mobiles which display videos well have a selling-point, and videos which work well on mobile attract more views.

We can tell that the format people are watching videos on correlates with the length of videos they’re watching. Videos less than 5 minutes long account for 55% of total video consumption time on smartphones. This makes sense, as short bite-sized information is what you’re most likely to digest on-the-go in such small format… If you were watching a feature-length movie, you’d probably want to upgrade your screen size to get the full experience! The channels that people are choosing to view their entertainment through is also changing from the traditional norms. YouTube reaches more 18+ year olds during prime-time viewing hours than any cable TV network.

The culture of watching videos on your phone whilst sat on the bus or waiting in a queue at the Post Office, means that people are ignoring sound more and more.

Large Quote
85% of videos on Facebook are watched without sound.
Text Block

This creates a specific task for video-makers, to get their message across without words, or through integrating sub-titles.

Technology is enabling video to blossom in new ways, for example 29% more people viewed a 360° video than the same video in traditional format. Live videos have also been popping up for a while now, with Twitter launching Periscope in March 2015 and Facebook joining the bandwagon with Facebook Live in February 2016.

In a world where we’re being over-stimulated by a constant stream of information, we’re getting lazier about seeking this information out – four times as many consumers would prefer to watch a video about a product than read about it – so if you’re trying to sell a product, you need to provide your customers with information in the easiest format for them to digest! Thinking back to my previous blog post, video works in much the same way as imagery, being far more memorable than hearing or reading the same information.

Video is the not-so-secret weapon of content marketing, to the extent that even using the word ‘video’ in an email subject will boost open rates by 19% and click-through rates by 65%. Is it time you harnessed the potential of video in your content marketing efforts?

*All fields marked with an asterix are mandatory

If you are an experienced digital marketeer with a flair for copywriting, we'd love to hear from you. As a Digital Project Manager, you will be at the heart of our creative output, managing web and social channels for us and our clients. Our approach is very much quality over quantity as we strive to deliver the best service possible.

Apply now and create a fresh start for yourself in 2020.