In my previous blog posts I discussed a variety of topics within Virtual Reality (VR), from what VR actually is (beyond gaming), the different headsets, its uses across multiple industries and what the future may hold for VR. Since then, I have managed to try out VR for myself using the HTC Vive and would like to share my experience…

I went into this having done quite a bit of research on the subject, so I did have a big list of expectations… in some ways the VR experience didn’t disappoint, but at the same time I wasn’t quite as wowed as I thought I’d be. This could have been due to several factors, such as the VR simulator showing only small demos, with limited environments to try. Or maybe the fact that I had to remove my glasses for the headset to fit properly – without my glasses on being in VR did make me feel rather queasy, both during and after the experience. Minor criticisms aside, I did have a lot of fun and it did have many good points to it!

The first thing that I really couldn’t picture was how the interface would look when you’re actually wearing the headset, and I have to say at first use it feels a bit weird, but in a good way! Your brain tells you that you’re obviously in a computer-generated environment, but it really feels like you’re there! However, it does become quite difficult to picture yourself back in the real world, for example like what direction you’re facing.

Although the actual VR experience was within a small, limited demo it was very interactive and had a variety of different things you could do. For example, in one simulation it gave you the chance the explore an icy cave in Norway, where you could have a look around and blow-up some balloons! Whereas, in another simulation I could explore our solar system and move planets about as I liked! The sights combined with the sounds make you feel completely immersed within the different environments and it’s odd how easily you’re tricked into feeling like it’s all real! I found myself physically moving around to avoid obstacles or jumping at things that obviously aren’t there in the real world, but you just forget about reality completely. 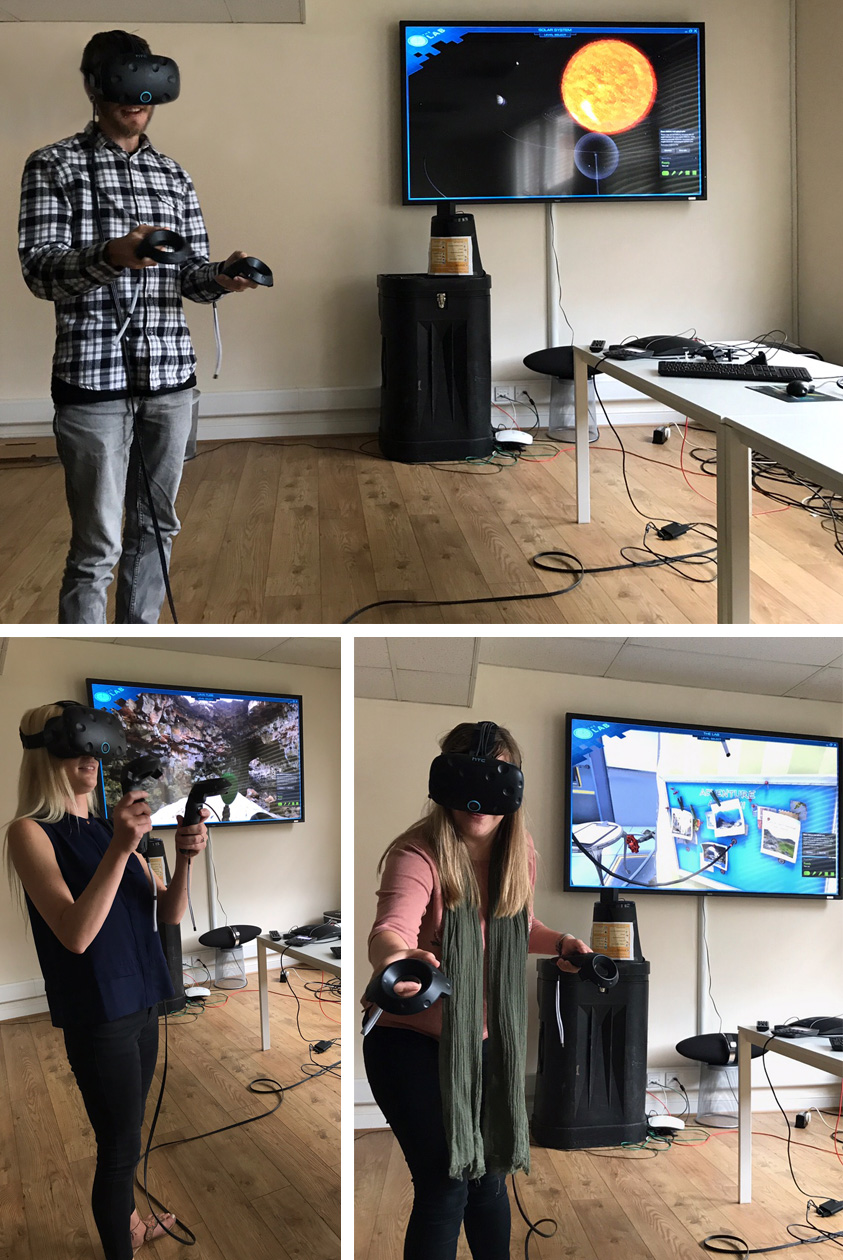 I absolutely love how interactive and responsive the HTC Vive system is, and how quickly you can pick up on how to use it. The graphics were also really impressive, and the sound effects were in perfect sync, which added to the atmosphere. The fact that you actually feel like you’re really in the environment is unique – the easiest way to explain it is that it’s kind of like watching something in 3D, but it’s all around you, as if you’re in the game or video with them!

The only thing I didn’t really enjoy at all was that I did feel rather sick and dizzy while using it. I know that VR developers say that people can experience a little bit of dizziness during use, but I felt a bit sick during and for a while after using it…. The fact that I couldn’t wear my glasses with the headset must have added to this feeling, so perhaps I’ll have to have another go with a headset that does accommodate glasses! The actual tracking of your motion is also a bit glitchy at points, for example when the sensors crossed paths, or didn’t go where they were supposed to, it took a moment to sort itself out.

Personally, I think Virtual Reality has a little way to go in ironing out a few more kinks to make it a better experience, but as it stands it is an extraordinary piece of technology. I really can’t wait to be able to try out different things on it – I’d love to try VR out with gaming, but I also want to see how they’ll make films and TV shows work, like this Trinity TV Show… let’s watch this space!

Have any of you tried Virtual Reality yet? If so we’d love to hear your thoughts and experiences – give us a tweet via @gmdesignltd.