It’s over a year since we delved into the topic of male grooming, and what better time to take stock of the market than during Movember?

The ‘lifestyle barber’ is a modern term, born from the 360° evolution of the traditional barbershop; the ‘golden age’ of male grooming is very much back in fashion with men spending more time, money and effort on their appearance than ever before. “Men are starting to get more and more knowledgeable about beauty and are paying attention to their looks… haircare is the biggest category” states Elodie Bohuon, beauty buyer for Selfridges, in an article for the Independent.

The issue has been that men have not had a dedicated place to get their grooming needs attended to; yes there is the unisex hair salon or even the spa for a sauna and swim, but these are not solely dedicated to men’s needs. For the most part, men see male grooming as ‘maintenance’ to look good, rather than as a treat (as I see it when I get my eyebrows threaded!) and generally feel more comfortable in men-only spaces for these purposes – thankfully the resurgence of the traditional barbershop, or the ‘lifestyle barbershop’ in modern terms, is very much on the rise.

Partly due to economics, during the early 20th century barbershops were very popular, easily rivalling pubs and taverns. The original old-school barbershop environment boasted an approachable, relaxed and friendly atmosphere; a place for men to frequently hang out and catch-up on the latest news (…AKA gossip?) whilst enjoying a beer, oh and a haircut.

Fashion at the time would have been something along the lines of the ‘Hollywood’ (not Paul, I might add), first seen on the silver screen’s leading men, which consisted of slicked-back black hair, a perfectly clean-shaven face, and a dashing white grin; the height of fashion for some time due to the leading men who wore it. It’s also a popular modern day ‘do named ‘The Slick Back’. This particular fashion was backed-up by the popularity of the safety razor from Gillette, who actually won the contract to supply the entire Armed Forces of the Untied States throughout World War I with the safety razor – that’s around 3.5 million razors and 36 million blades. This introduced the idea of self-shaving with a safety razor to a huge number of men… 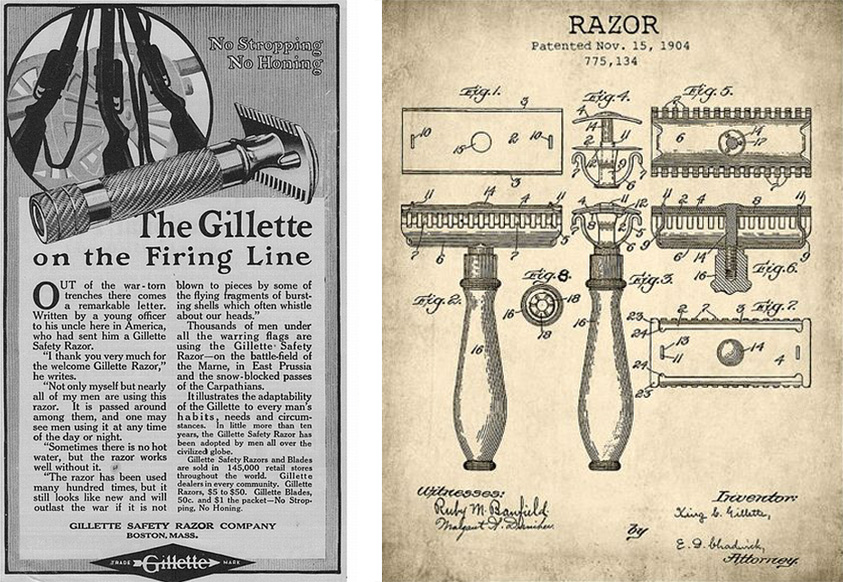 After the Great Depression and World War II, men started to spend less time at the barbershop and more time using a razor at home; self-shaving was marketed as a cheaper and safer alternative to the barbershop. The 60’s and 70’s then brought a new – somewhat hairier – fashion with it and the rise of the unisex salon meant that the traditional barbershop remained, for the most part, a thing of the past… that is until now.

Fast-forward to modern day and I truly think we’ve come 360° on this; whilst the fashion may have shifted and the clean-shaven look is waning in favour of the beard, the homely feel of a traditional barbershop is very much on the rise.

It’s totally acceptable for a man to take pride, spending time and money, on his appearance (like the good-old days), just look at the stats: Huffington post state that 70% of men spend 1-3 hours a month getting groomed at a stylist or barber compared to 39% of women! Last year, 25% of salon customers were men, according to a survey from Professional Beauty and hairdressing supplier, Salon Services – with men-only salons continuing to gain popularity.

Here in Exeter we’ve got several barbershops in town, and I’m locally witnessing the move from this ‘in-and-out’ approach to clients, to more of a lifestyle salon, or barbershop where more time is spent on and with the clients. Take Luka’s Barbers for instance where they’ve created a lifestyle barbershop, people come to hang out in a relaxed environment, chat and… wait a minute… this is just like a traditional barbershop, but with games consoles!

Youtube Video
Large Quote
Being in this industry I’ve noticed a rise in male grooming… I call it a lifestyle barbers because it’s not the type of place where you just turn up, sit down and wait. Everything we do is by appointment… Men can have a beer and a chat and that is what barbering is all about. I wanted to put a modern concept on something traditional.
Luka Chitty
Text Block

I can’t talk about male grooming without mentioning the beard; this trend shows no signs of slowing down, and male grooming product companies – particularly shaving companies – should continue to diversify beyond the razor. Mintel Beauty Analyst, Margie Nanninga suggests that “new product launches that specifically address men’s growing facial hair needs may give the men’s personal care market a boost, helping combat struggling sales in the shaving products segment.”

This is where companies such as Dollar Beard Club have hit the jackpot, essentially using the same business model as Dollar Shave Club – a monthly subscription service for male grooming tools/products. Both take a humourous approach to marketing reminiscent of the 2010 ‘Smell like a man, man’ campaign from Old Spice; Dollar Beard Club have clearly fulfilled the need with a booming business in less than a year after trading.

Large Quote
Stay faithful to your facial hair and who knows where it might take you!
Chris Stoikos
Text Block

Premium product brand Apothecary87 represent the attitudes/beliefs of their target market, taking a ‘lifestyle’ approach to one of their ranges: “A well-groomed man is not merely a man who uses great products on his hair and body but a man who can present himself in his own desired way, through all aspects of his lifestyle. So with this in mind, we have developed our Lifestyle Range to help our fellow men be the best-groomed men around”. This approach to marketing is clever because it taps into their consumers’ way of life, their culture, or opinions and serves to contribute and inspire through its product offering.

With guys owning an average of 8 products, male grooming is an ever-evolving segment within the hair, health and cosmetics industry – the total market size for male grooming is predicted to be worth a whopping $41 billion by 2019 – we’ll be keeping an eye on the global attitude shift… after all ‘real’ men do wear moisturiser!

Inspiration: Hair and Beauty: The Rise of Male Grooming 28 May 2015
Content Marketing: Why is Brand Storytelling so Effective in Marketing? 17 March 2016
Technology: Virtual Reality: What are the Benefits Beyond Gaming? 29 April 2016
gm.Studio: A Day in the Life of a Design & Content Administrator 24 January 2017
Design: Design Trend Predictions for 2017 12 January 2017
< Back to blog overview