Illustration from Around the World

Inspiration is vital for designers – to get the creative juices flowing – and to spark new ideas for future projects. As one of my favourite areas of design, it’s always a pleasure to get immersed in what other illustrators are creating, and I feel like there is a different style of illustration for every mood. In this post I’ve chosen a few illustrators of different styles, which jumped out at me for various reasons, evoking particular emotions.

A Greek visual designer based in Paphos, Cyprus. This series of illustrations called ‘Waves of Colour’ is my favourite of Charis’ collections. He captures a sense of movement and excitement through fluid, vibrant, swirling shapes. With an impressive client list, including Nike, Google, Ferrari, PepsiCo, Toyota and IKEA, it’s not surprising he has been named three times in a row as one of the 200 World’s Best Illustrators by Lürzer’s Archive. As a fan of bright colours personally, I’m drawn to Charis’ use of vibrant colour schemes and energetic pace. 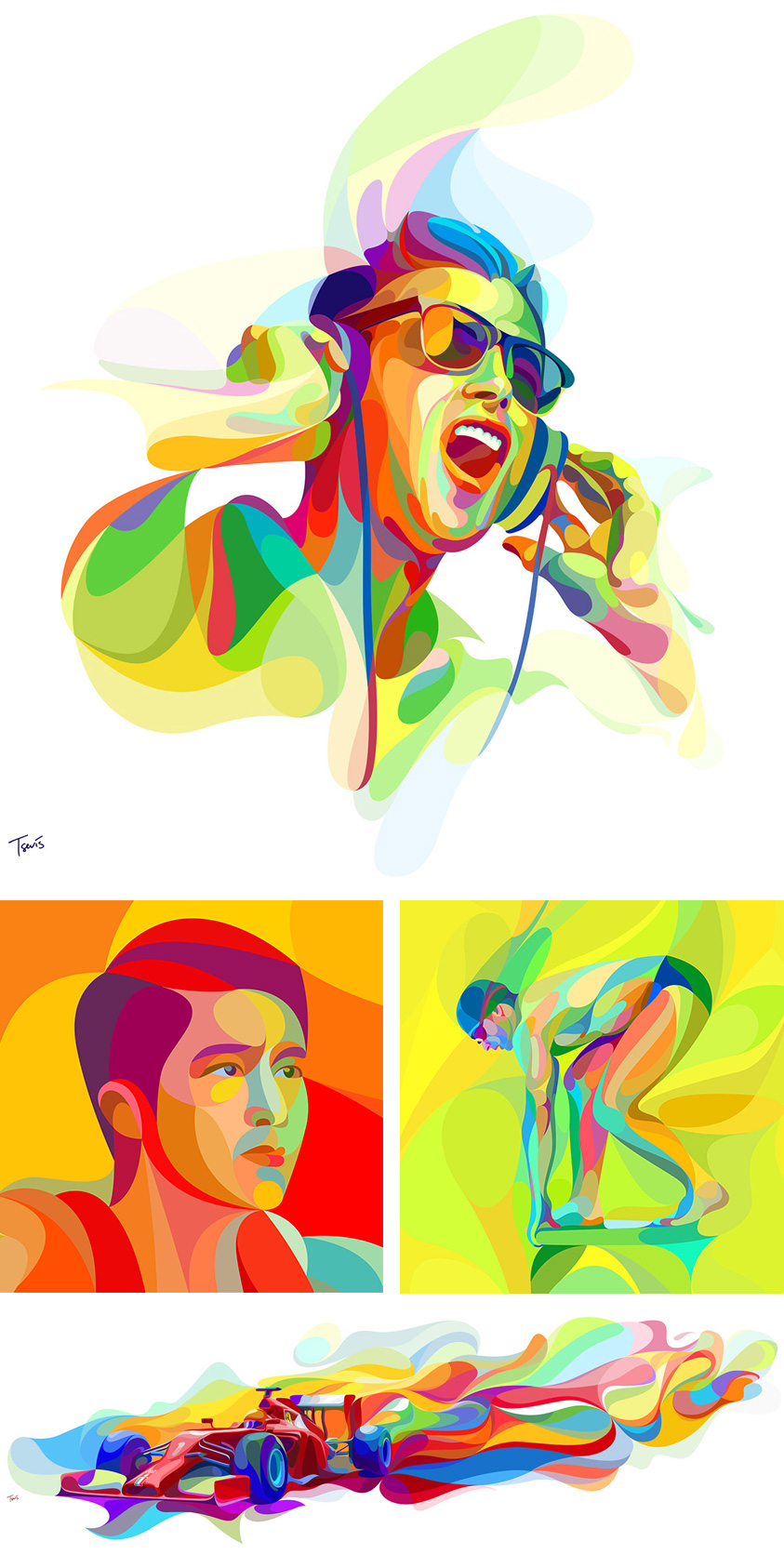 An artist and fashion illustrator based in New York City. Katie has been commissioned by the likes of Cartier, Christian Louboutin, Swarovski, Disney, Alicia Keys and Elle. Using watercolours to beautiful effect, some of her minimalist pieces appeal to me the most – where the head and shoulders are merely suggested with a couple of brush strokes – and the absence of any paint at all suggests light being cast across a figure.

A Toronto-based painter and illustrator, whose work is influenced and inspired by a love of culture and travel. Her work has appeared in the Latin Grammy Awards, The New York Times, The Wallstreet Journal and Time Out London. Farida’s art has also been used for posters, book covers, children’s book illustrations, corporate projects, clothing, packaging and giftware. This work definitely exudes a happy vibe – the bright, colourful and whimsical style is sure to have a positive effect on your mood! And probably inspire you to travel…

An illustrator and graphic designer based in Heidelberg, Germany, Daniel graduated in September 2014 with a degree in Media Management and Communication. One of his low poly portraits have already been shared by a famous German comedian on social media and featured on the cover of BOOM Asia magazine. Geometric design has been one of my favourite styles for several years, so this work sparks a particular interest in me. In addition to the finished work, Daniel often shares the structure behind the illustrations, ‘the net’ if you will – and this kind of behind-the-scenes insight always piques my interest. 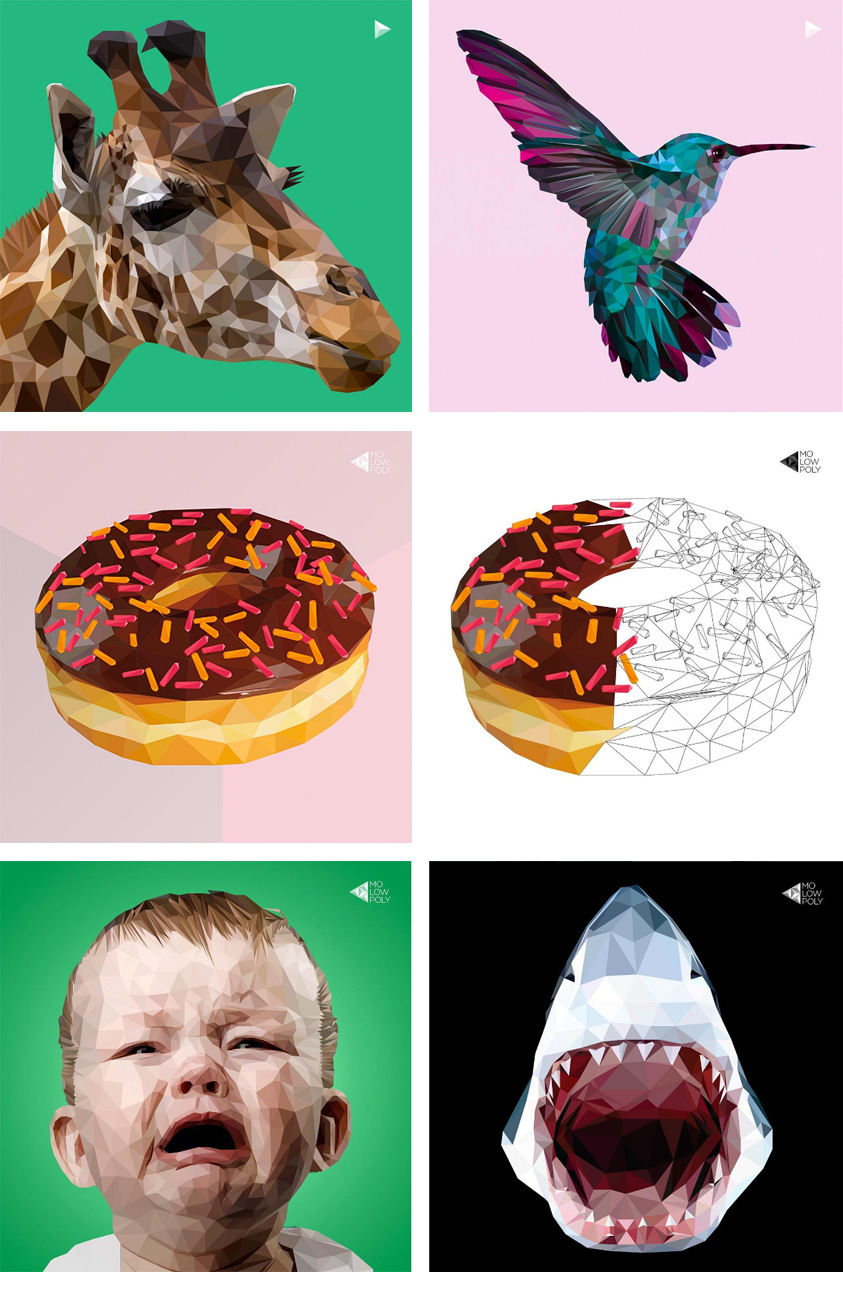 A freelance illustrator from Morocco. These night-time landscapes stand out to me for their clever contrast between vivid luminosity and deep darkness. Light is such an important aspect of an effective image, and its balance with darkness here creates a striking effect. Some of the blurring effects also help to create an almost-futuristic feel. I love how these images portray the glow and activity of human life from a quiet distance – You can imagine looking on from a silent spot in the dark, to a location that is actually alive with activity up-close.

A small creative agency based in Croatia. This personal project was inspired by art and storytelling; to revive beautiful childhood stories with new endings. The element of these illustrations which captures my interest most, is the movement and depth of field created by the floating items, for instance, the leaves in the Pocahontas artwork. They make you feel included in the scene rather than an onlooker to a flat image. The muted colour scheme also creates a bit of mystery and magic, to capture the feel of fairy tales.

For more inspiration check back soon, when I’ll be sharing inspiring pieces of work from other design areas…